Roots from all ecosystems are poorly represented in terrestrial biosphere models (TBMs), leading to a disconnection between data streams collected by ecologists and model representation of belowground processes.

Reasons for the overly-simplistic representation of roots include: 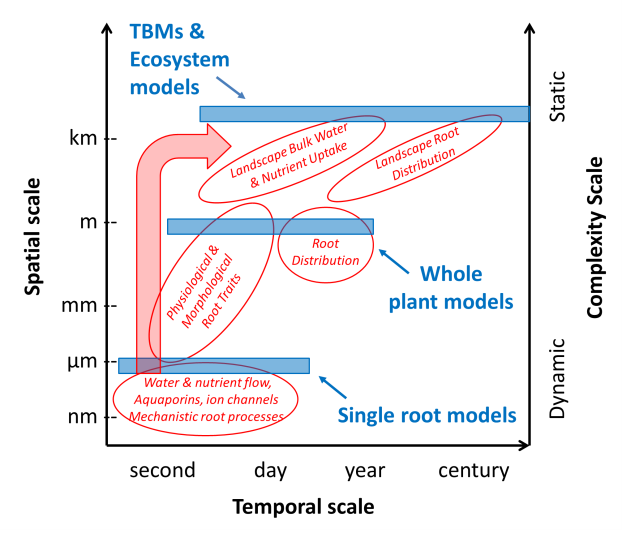 The overarching goal of the multi-discipline Root Function Team (plant, soil and hydrological modelers, scientists and data managers) is to use a ModEx approach to improve the representation of fine roots in TBMs in order to better project responses of terrestrial ecosystems to global change.

In a comprehensive literature review models (Warren et al. 2015), we described the current state of root representation in models at multiple scales, ranging from mechanistic processes at the scale of a single root to parameterized root processes operating at the landscape scale. We further discussed how existing and future root functional knowledge, new data compilation efforts, and novel modeling platforms can be leveraged to enhance root functionality in large-scale terrestrial biosphere models. Both improved parameterization within models, and the introduction of new model components such as dynamic root distribution and root functional traits linked to resource extraction, are needed.

Evidence suggests that the spectrum of plant strategies integrates across leaves, wood, and roots, and a rising tide of data is exposing important linkages between species-specific root traits and important root functions. Building on knowledge gained in our literature review, we aim to improve the representation of fine roots in TBMs by facilitating modeling approaches that embrace the inherent variation and tradeoffs in plant traits in response to current and future environmental conditions.

We focus on three trait-enabled tasks:

Map of locations currently in the Fine-Root Ecology Database (FRED).

Our literature review developed a framework to improve fine-root representation in large-scale models through new data compilation and collection efforts, scaling and modeling. Building upon this framework, we will leverage and develop focused field, laboratory, and mechanistic model-experiment interactions to link key root processes with root traits, and to validate root functional responses to environmental conditions. A primary component of these efforts will be quantifying root function for key root traits based on existing data and new experiments. Combining our knowledge of root traits for a given PFT with specific root functions (i.e., water and nutrient uptake kinetics, and C release through respiration, exudation and turnover), will allow us to link traits with function that can be scaled to the landscape level.

Objectives for this task are:

We developed a comprehensive review manuscript that assesses current and future incorporation of root structure and function into models (Warren et al. 2015). A variety of different modeling recommendations emerged from the study, including:

We led a number of international workshops focused on roots and belowground process representation in models, including a successful workshop at ORNL in June, 2014, on the ‘Improved Representation of Roots in Models’ and an Organized Oral Session at the 2014 Ecological Society of America meeting, “A Path Forward for Improved Representation of Fine Roots in Large-Scale Models: Linking Models, Data, and Experiments.” We also initiated the creation of a much-needed root trait database to provide novel synthesis of root data and to aid model development, one of the key workshop recommendations, and to continue the development of a ‘root module’ in the Community Land Model, which will allow root scientists to access and experience model treatment of root processes.